During the week, I was going through one or two of my books, came across what looked like a really lovely recipe for Pina Colada Cupcakes.  And, yes, Dear Readers, it was yet another recipe which had either been untried by the author, or had been misprinted.

The recipe called for…. wait for it…. 454g (1lb) of pineapple cut up into small pieces.  This, I dutifully did, and was having doubts when the butter/sugar ratio was far different to anything I had seen before. However, I persevered, but should have paid attention to my first instincts.  It was a dreadful, overly sweet, awful looking batch of cupcakes, which, sadly, found a new home in the bin.  When I did a bit of research on other recipes out there, most only used about 3 – 4 slices of pineapple.

Moving swiftly onwards, I had bought a couple of cans of coconut milk, and was wondering now what to do with them.  I had briefly glanced through Marian Keyes new book “Saved by Cake“, which I recently added to my collection, and found the very thing!

This is a lovely book, with her introduction being a poignant, funny, brutally honest, soul-laid-bare narrative, in which she describes how baking became a form of therapy to help her through Depression.

Marian’s recipe for Coconut Milk Cake just “happened” to contain some of the ingredients left over from the cupcake disaster, so I set about making it.

I don’t have a Bundt tin, so I decided to take a chance, once again, and use half quantities of everything in her recipe, and bake it in a 2lb loaf tin.

Here is the recipe I used, just double it to make Marian’s in a Bundt tin.

Put all your dry ingredients into a separate bowl and give it a mix.

The method is the same for this cake as for most of my other recipes, in that, you beat the butter and sugar together.  Add the eggs, one at a time, with a little of the dry mixture, along with a small amount of the coconut milk, each time, until all of it has been incorporated.  Then add the Vanilla and give it a final mix.

Put the cake batter into a greased and floured or paper-lined 2lb loaf tin, and bake for 60 minutes. 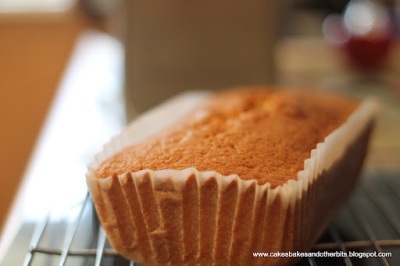 Marian has a recipe for an optional syrup with which to “feed” the cake.  I adapted it slightly to make a sauce.  Here’s my version.

If you are serving this to children, naturally, leave out the rum, it will still taste great!

Put the coconut milk and brown sugar in a pot and heat, stirring until the sugar  melts.  Thicken the sauce with the cornflour, and add the rum, stir, and it’s done!

Serve in slices, with the sauce poured over.