The Monasterboice Inn, or Donegan’s, as it is known locally, has a long established and distinguished reputation for serving the best steaks and beef in the area. Located on the R132,  just off the M1 Motorway, north of Drogheda, it was the stop off point for a bite to eat on your way to Dublin or Belfast.  Indeed, the spirit of the original building lives on, as it started life 200 years ago as a coach house. 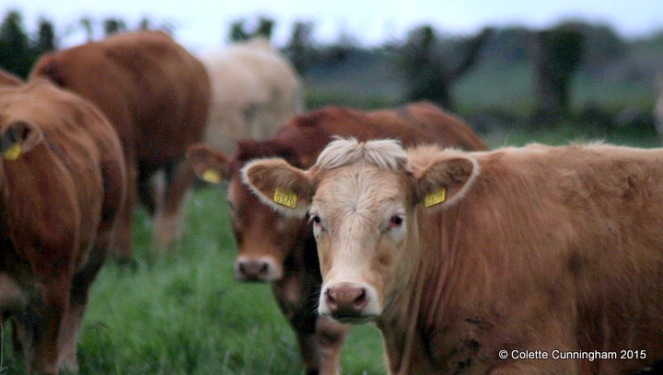 As part of the Boyne Valley Food Series, a Farm Walk and Steak Dinner was the planned event to showcase just where Donegan’s famous beef comes from, and learn a bit more about their cattle.   The event, which took place on Friday, 22nd May, was also attended by representatives from Failte Ireland, Carlingford & Cooley Tourism Association, Meath Tourism, and Mr. Olan McNeece (Great Grandson of Dan Kelly) who brought Dan Kelly’s Cider to the market in 2013.

We met Farmer Joe O’Reilly, who explained their methods of farming. They keep a mix of Limousin and Charolais cattle, most of which are born on the farm, with some bought in from Market.  He also talked about the popular cuts of meat, such as sirloin, fillet, rib-eye, etc., and explained that most of the rest of the animal would go in to making Minced Beef.

If only, in my opinion, we could adopt a “nose to tail” approach when it comes to ordering and buying beef as consumers.

We returned from our walk to the conservatory, which is adjoining the Restaurant area, where we were shown two less well-known cuts of beef, and yet less expensive cuts – Feather Blade and Skirt. Chef Mark Fearn (La Rousse Foods) was on hand to talk us through the marinading and cooking of the meat.  “Low and Slow, or Flash-Fry”, that is how to treat these delicious pieces of meat.  We were also treated to a wine pairing and tasting (which I found fascinating) given by Mr. David Patton, and our own choice of steaks for dinner. 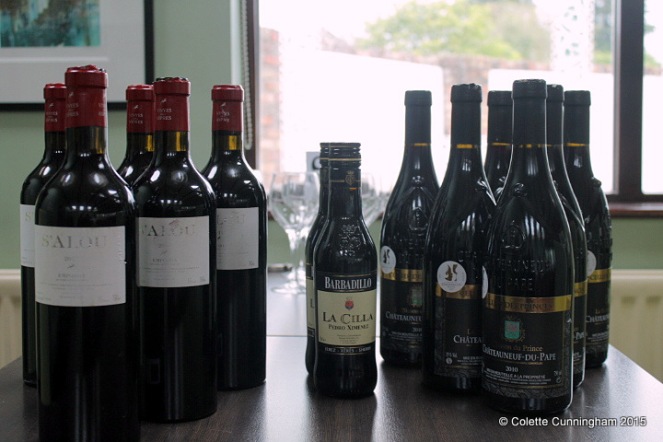 Our steaks were accompanied by a selection of vegetable side dishes and sauces, which were served separately. 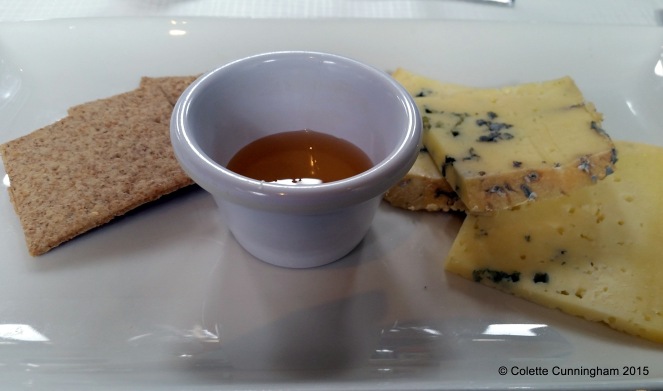 Bellingham Blue Cheese (Castlebellingham), served with Lannléire Honey (Dunleer) and Sheridan’s Brown Bread Crackers completed our meal, which was paired with a Dessert Sherry, (Barbadillo La Cilla Pedro Ximenez), rather than Port.  The over-riding flavour was that of raisins, which was a perfect and surprising match for the locally-made Cheese and Honey.

The afternoon proved to be very informative and interesting.  The company was convivial and the food and hospitality was superb.  My thanks to our Hostess, Ms. Roseanne Donegan for organising the event, and making it the success it was.

Disclosure:  I was a guest at this event, on behalf of the Boyne Valley Food Series. My attendance was complimentary.