Jeni Glasgow, who, along with her Husband and Head Chef, Reuven Diaz, owns The Eastern Seaboard Bar & Grill, and The Brown Hound Bakery, Drogheda, Co. Louth, recently announced on Facebook and Twitter she would be hosting Baking Masterclasses for the month of November.  The classes, entitled “Get Baked With Rob”, were to be given by Robert Thompson who is a Chef and Kitchen Manager at The Eastern Seaboard Bar & Grill.

After enjoying their Signature Salted Pumpkin Seeded White Loaf on many an occasion, either bought from the Brown Hound Bakery, or served at The Eastern Seaboard Restaurant, I had to find out the secret of this delicious bread.

The first of four weekly demonstration Masterclasses began on Thursday night, 1st November.  After an initial “meet and greet”, and given our hand-made name tags, by our gracious hostess, Jeni, we headed upstairs, and into the Bakery kitchen.

The idea for this first class, was to show us what could be made using just one bread dough recipe.

First up was a demonstration on the making of, and the recipe for, the Brown Hound Signature White loaf, The “Seaboard Loaf”, and yes, folks, I finally have the recipe which will remain closely guarded!

Robert made it all look effortless.  His ease of technique,  whilst keeping his audience engaged, made the Masterclass so easy to follow.  Jeni did remark that watching him kneading the dough was mesmerising, as, at that point, we were all sitting in silence, concentrating on what he was doing. 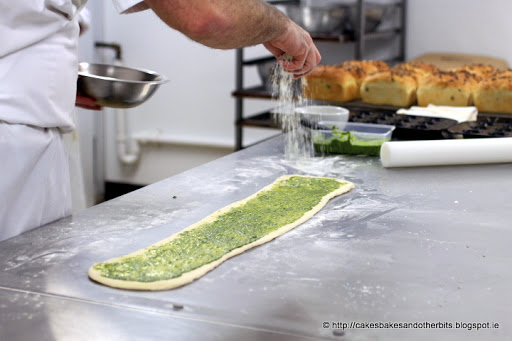 From there, Robert moved on to a savoury “Stuffed” pie,  Pesto & Parmesan twists (great idea for canapés for a party, or indeed Christmas entertaining), a flat bread with olives, oven-roasted cherry tomatoes, red onion and mozzarella.  Not content with just the savoury items, we were then shown a sweet pizza idea, using an apple, butter and cinnamon filling, and finally, “swanky cinnamon swirls”. 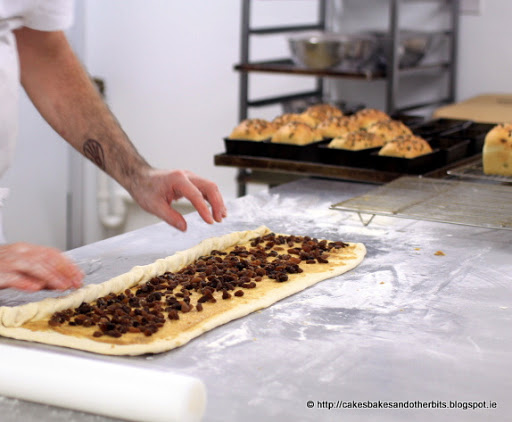 After all this baking, it was soon time for sampling, so we went back downstairs to the Bakery, and did just that.

The Masterclasses (which, I understand, have now been completely booked out), cost €100 for four evenings.  This, I feel, is an excellent price for what is offered, an informative demonstration aimed at all skill levels from novice to confident baker, recipes to try at home, baked goods to sample, and a very enjoyable way to spend a few hours on a Thursday.  I, for one, am really looking forward to the rest of the classes.

Disclaimer:  Blogpost has been written at my discretion, and the Masterclasses have been paid for in full by me.

6 thoughts on “Brown Hound Bakery Masterclasses – "Get Baked, with Rob"”