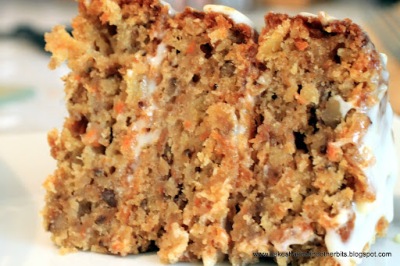 Two baking-related things happened this week!  First of all I made Peggy Porschen’s Carrot Cake, and second, I made it again, entered The Sunday Cook-Off* on Twitter, and won “Dessert of the Week”!
*This is a competition run on Twitter every Sunday. No prizes are awarded, as it is just for fun.  Take photos of what you are cooking and post them.  Anyone can join in, just follow the Hashtag Sundaycookoff.
I acknowledged at the time that the recipe was not one of my own. As I already said in my previous post that I would be trying out more of Ms. Porchen’s recipes, here it is!
I made one tiny change to the recipe for the cake, i.e. used Vanilla Extract instead of Vanilla seeds.  However, I did not complete all the stages for icing and decorating which are fully explained in the book.


**I found tinned Crushed Pineapple in a very large UK supermarket, but you can blitz slices, and it works just as well.


The recipes calls for baking the cakes the day before you need them.  If you don’t have time, bake them early in the day, and allow them to “rest” for a couple of hours, before assembling and icing.


Beat the oil and sugar together.  Then, with the beater running on a low spead, add the egg gradually until you get a very smooth mixture.


Next, add the walnuts, carrots, and pineapple and mix well.  In a separate bowl, sift the flour, bread soda, baking powder, cinnamon and salt together, and, in two batches, add to the wet mixture, beating slowly between each addition. 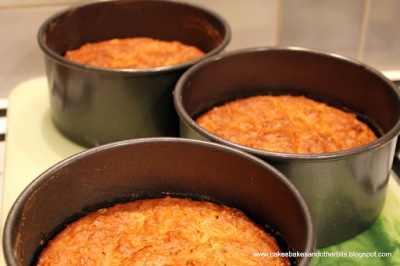 Divide the mixture between the three tins, and bake for between 40 – 50 minutes, or until a skewer comes out clean.  Leave in the tins for about 10 minutes to cool, and then place on a wire rack, to “rest”. 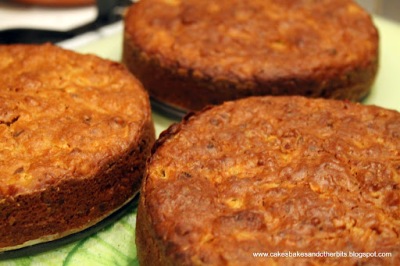 I used a cream cheese filling recipe, from Pam Corbin, The River Cottage Handbook, No. 8.  Beat 120g cream cheese along with 150g icing sugar, and 25g softened unsalted butter.  Add zest of an unwaxed lemon, and 1 teaspoon vanilla extract and mix until smooth.  Leave this in the fridge to set for about an hour.


You need to trim the surface of the tiers which will form the bottom and middle layers of the finished cake. Do this using a serrated knife. Spread your cream cheese over cakes and sandwich together.  If there is some left over, place on the top and sides of the cake.