I bought a few packs of wholegrain Spelt flour a while back, and was not really sure where, or how to use it. However, with a bit of lateral thinking, I came to the conclusion that it could be substituted  in any recipe which would lend itself to the nutty flavour of Spelt.


After a few (well, lots, if the truth be told!) trials and taste-tests, I eventually came up with this recipe for “Half and Half” bread rolls. Half Spelt, half strong white bread flour.

250g Wholegrain Spelt Flour
250g Strong White Bread Flour
10g Salt
10g Dried Yeast
2 1/2  tspns Runny Honey (Oil your teaspoon and the honey will glide off)
2 tbspns Sunflower Oil
350 mls. Warm Water
4 oz Mixed seeds* (Optional) I used seeds on, and in, a few of mine just to keep it on the “half and half theme”!
Place both flours in to a large bowl and combine well.  Then, add the salt, yeast, honey, oil, and warm water and mix until all the ingredients are incorporated.  Bring together to form a dough.
Either, place the dough on a floured surface and knead by hand for 10 minutes, or, put it in to the bowl of a food mixer, and, using the dough hook attachment, let the machine do the work for 5 minutes.
Transfer the dough to an oiled bowl, cover with a tea-towel and leave it in a warm place for at least an hour to rise. Once risen, punch the dough to knock it back, (take the air out).  Add the seeds to the dough at this point, and knead again for a further 5 minutes, or you could just sprinkle them on top when you make the individual rolls.
*I used a packet of ready-mixed seeds, containing Golden Linseed, Sesame, Pumpkin and Sunflower.  You can use whatever mix you like.
Weigh your dough to calculate how many rolls you require per batch. The concensus from my Twitter pals was between 50 -80g for small rolls, and 150 – 160g for sandwich-sized ones.


Cut off pieces from the dough, weigh each one, and form in to rounds.  As my dough weighed 933g after proving and knocking back,  I will admit, I  made 9 rolls, weighing between 93 and 95g each, with some dough left over to make a Cook’s Perk!  This is a good size for a child’s lunch for school, or 2 rolls for an adult, if you are hungry!


Put these on an oiled baking tray, cover, and set aside again to rise in a warm place for a second time.  I let them prove for around an hour. 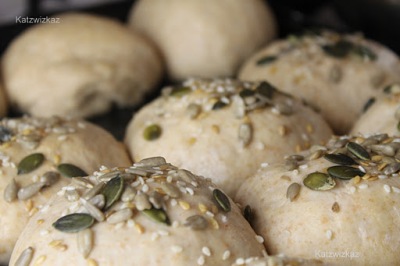 Ready for the oven, looking all pale, and somewhat and interesting!
Pre-heat the oven to Gas mark 5/375F/190C. Brush the rolls with a mix of milk and beaten egg, sprinkle the seeds on top, and bake for 10 minutes, then turn  the tray, and bake for a further 10 minutes. As usual, test with a skewer to see if they are cooked through. Also, tap the bottom of the roll.  If it has a hollow sound, then it is cooked. If not, leave in the oven (turned off) for a further 5 minutes  to finish.


My grateful thanks the following guys and gals for their hints and tips regarding weights for each roll:-

I have tasted these with butter and marmalade for breakfast, and with cheese for lunch.  They really do suit savoury and sweet toppings, and I think Spelt flour tastes just that little bit nicer than Wholemeal. I was really pleased how mine turned out. Tell me, what do you think?

17 thoughts on “"Half and Half" Spelt Bread Rolls”