So, my winning streak continued last week, when I was lucky enough to win two tickets to “Taste of Christmas” from The Irish Food Bloggers Association recent Give-away. Babs and I headed off on the train for our day out in the City.


After walking from Connolly Train Station, we found ourselves at the Convention Centre in Dublin, and headed in to sample all that was on offer.


While browsing around just to get our bearings, an alarm was activated, and an announcement to “Evacuate the Building” was triggered.  Thankfully, after a few minutes, what ever drama had ensued, the order for staff to “Stand Down” was given, as it had been a false alarm, and normal service resumed!


Exhibitors were offering goods and foods, from Poultry to Chocolate, hampers, wines, cakes and crafts, and surprisingly, some totally non-food related items. As it was billed as “Taste of Christmas”, I did expect there to be mainly food producers exhibiting, and, perhaps, more than were actually at the show. 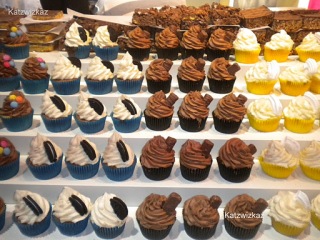 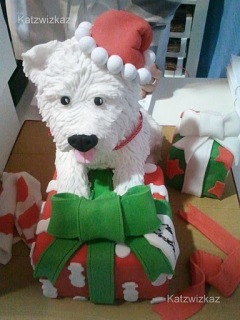 Crean’s Lager from Dingle Brewing Company, Cupcakes and the fabulous Dog cake from Bake My Cake, and Chocolates from Cocoa Atelier 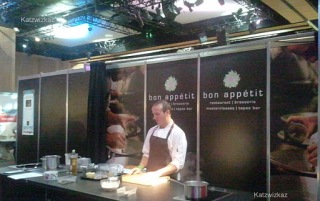 Oliver Dunne
I wanted to see some cookery demonstrations before we left.  We sat in for Edward Hayden’s Meringue Roulade and Oliver Dunne’s Chestnut Soup with Soft Poached Hen’s Egg recipes respectively.  Both of these dishes will grace my Christmas table this year.
As our tickets expired at 2 p.m., we made our way back to Dublin City Centre, where we landed into the middle of an Austerity Demonstration, but, that’s another story…..
Taste of Christmas was not as well attended by food producers, as I had hoped, but there was another food exhibition running in Dublin at the weekend.
I enjoyed finally meeting and chatting with Edward Hayden.  Hopefully, next year’s show will be bigger and better.